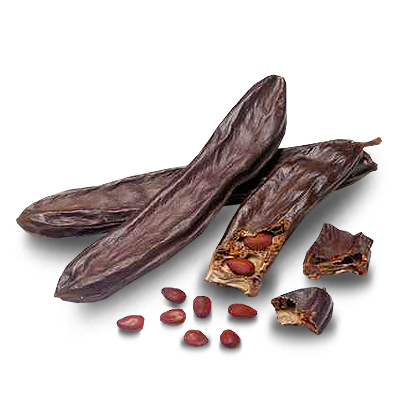 Carob is native to the eastern Mediterranean, probably the Middle East, where it has been in cultivation for at least 4000 years. The plant was well known to the ancient Greeks, who planted seeds of this plant in Greece and Italy. There are references to carob in the Bible. For example, this plant is also called St. John's bread or locust bean because the pods were once thought to have been the "locusts" that were eaten by John the Baptist in the Wilderness.

The fruit of carob is a pod, technically a legume 15 to 30 centimeters in length and fairly thick and broad. Pods are borne on the old stems of the plant on short flower stalks. Interestingly, most carob trees are monoecious, with individual male and female flowers. The dark-brown pods are not only edible, but also rich in sucrose (almost 40% plus other sugars) and protein (up to 8%). Moreover, the pod has vitamin A, B vitamins, and several important minerals. They can be eaten directly by livestock, but we know carob mostly because the pods are ground into a flour that is a cocoa substitute. Although this product has a slightly different taste than chocolate, it has only one-third the calories (total 1595 calories per pound), is virtually fat-free (chocolate is half fat), is rich in pectin, is nonallergenic, has abundant protein, and has no oxalic acid, which interferes with absorption of calcium. Consequently, carob flour is widely used in health foods for chocolate-like flavoring. A very fine polysaccharide gum--mucilaginous, odorless, tasteless, and colorless--can also be obtained from the pod and is now used in many products. There are also several putative medicinal uses of the plant, and singers formerly chewed the pod husks in the belief that this clears the throat and voice.

Carob pods were an important source of sugar before sugarcane and sugar beets became widely available.

Carob,dried or roasted and having a slightly sweet taste, in powder or chip form, is used as an ingredient in cakes and cookies. Carob is sometimes used as a substitute for chocolate. The seeds, also known as locust beans, are used as animal feed. They are also the source of locust bean gum, a thickening agent used in numerous processed foods. In Egypt, carobs are consumed as a snack.
transparent
Back to top