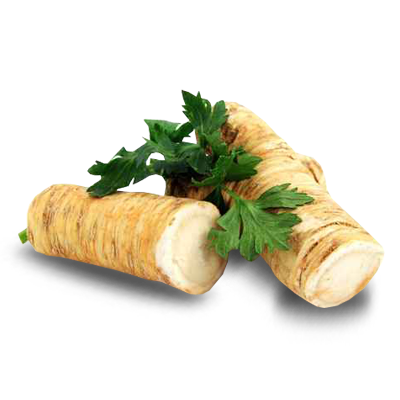 Horseradish (Armoracia rusticana, syn. Cochlearia armoracia) is a perennial plant of the Brassicaceae family, which also includes mustard, wasabi, broccoli, and cabbages. The plant is probably native to southeastern Europe and western Asia, but is popular around the world today. It grows up to 1.5 meters (five feet) tall and is mainly cultivated for its large white, tapered root.The intact horseradish root has hardly any aroma. When cut or grated, however, enzymes from the damaged plant cells break down sinigrin (a glucosinolate) to produce allyl isothiocyanate (mustard oil), which irritates the sinuses and eyes. Once grated, if not used immediately or mixed in vinegar, the root darkens, loses its pungency, and becomes unpleasantly bitter when exposed to air and heat.

Horseradish has been cultivated since antiquity. According to Greek mythology, the Delphic Oracle told Apollo that the horseradish was worth its weight in gold. Horseradish was known in Egypt in 1500 BC. Both root and leaves were used as a medicine during the Middle Ages and the root was used as a condiment on meats in Germany, Scandinavia, and Britain. It was taken to North America during Colonial times.

Where the English name horseradish comes from is not certain. It may derive by misinterpretation of the German name Meerrettich ("sea radish") as Mährrettich ("mare radish"). Some think it is because of the coarseness of the root. In Europe the common version is that it refers to the old method of processing the root called "hoofing". Horses were used to stamp the root tender before grating it.

Horseradish contains potassium, calcium, magnesium and phosphorus, as well as volatile oils, such as mustard oil (which has antibacterial properties due to the antibacterial mechanism of allyl isothiocyanate). Fresh, the plant contains average 79.31 mg of vitamin C per 100 g of raw horseradish.The enzyme horseradish peroxidase, found in the plant, is used extensively in molecular biology for antibody detection, among other things. It is becoming increasingly important in biochemical research fields. Known to have diuretic properties, the roots have been used to treat various minor health problems, including urinary tract infections, bronchitis, sinus congestion, ingrowing toenails and coughs. Compounds found in horseradish have been found to kill some bacterial strains.