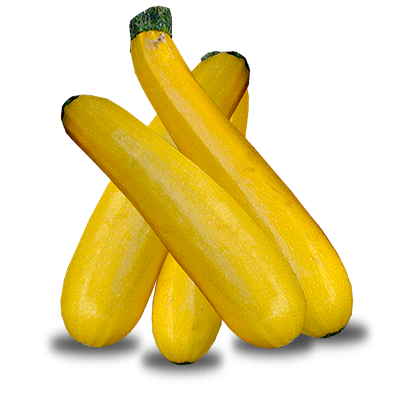 The zucchini or courgette is a popularly cultivated summer squash which often grows to nearly a meter in length, but which are usually harvested at half that size or less. Along with some other squashes, it belongs to the species Cucurbita pepo.Zucchini, Cucurbita pepo, is a member of the cucumber and melon family. Inhabitants of Central and South America have been eating zucchini for several thousand years, but the zucchini we know today is a variety of summer squash developed in Italy. The word zucchini comes from the Italian zucchino, meaning a small squash. The term squash comes from the Indian skutasquash meaning "green thing eaten green." Christopher Columbus originally brought seeds to the Mediterranean region and Africa. The French snubbed zucchini for a long time until chefs learned to choose small fruits which are less bland and watery. The French term for zucchini is courgette, which is often used interchangably for yellow squash as well.

Zucchini are the best known of the summer squashes, zucchini is a type of narrow squash that resembles a cucumber in size and shape. It has smooth, thin skin that is either green or yellow in color and can be striped or speckled. Its tender flesh is creamy white in color and features numerous seeds. Its edible flowers are often used in French and Italian cooking.

In a culinary context, zucchini is treated as a vegetable, which means it is usually cooked and presented as a savory dish or accompaniment. Botanically, however, the zucchini is an immature fruit, being the swollen ovary of the female zucchini flower. The zucchini fruit is low in calories (approximately 15 food calories per 100 g fresh zucchini) and contains useful amounts of folate (24 mcg/100 g), potassium (280 mg/100 g) and vitamin A (384 IU [115 mcg]/100 g. 1/2 cup of zucchini also contains 19% of the recommended amount of manganese.